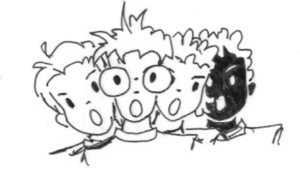 An Excerpt from the Novel

Mick was standing on top of Mr. Collier’s barn. His sixty-pound body was almost covered by helium-filled balloons tied to each leg. On each arm was a large fan. Bee Bee was with him and she was giving him advice on flying, a subject she knew nothing about. Bobby and Billy were on the ground watching what was taking place.

“Hey Mick, are you sure this is going to work?” Bobby hollered.

“Well, of course it’s going to work,” Mick answered. “I worked it all out on my computer. I’m going to be the first boy to fly without an airplane.”

“If you’re so sure it’ll work, why are me and Billy down here with this half mattress to catch you?” Bobby asked.

“Just a little insurance,” Mick replied. “Now, let’s run through it one more time. I’m going to get a running start to get up some speed and then soar off the end of the barn.  I’ll flap my arms to catch the air current and that will hold up the top half of my body. My legs will float with the balloons.”

“Bee Bee,” he instructed her, “make sure my arm wings are on tight.”

“I wish you weren’t doing this,” she said as she tugged on the wings as requested.

Mick backed up as far as possible on the barn roof. After making a final check of his equipment, he hollered, “HERE I COME!” He flapped his arms with the fans attached as he ran forward like a plane on an aircraft carrier.

To Bobby and Billy, it looked like slow motion. They each had a corner of the mattress expecting they would need it.

At the end of the roof, Mick leaped head first into space. Most of his experiments never seem to work just like they are supposed to. This one was no exception.  Though he flapped his arms as fast as he could, in a few seconds his head and shoulders began to sink. At the same time, the balloons tied to his legs caught the air current and began to rise. Mick was now flying, but with his feet pointed at the heavens and his head at the ground.

A slight breeze began to push the young astronaut out over Mr. Collier’s pasture. Bobby and Billy sprang into action. Over the fence they went with the mattress, ripping it on a barb. Cotton stuffing poured out, leaving a white trail as they ran to catch up with Mick. They could see the reflection of the sun in his big glasses as he slowly drifted about a hundred feet off the ground. He was waving his arms and shouting something, but they couldn’t understand him. Bee Bee, with nothing to carry, quickly overtook them.

“We’re catching up!” she shouted.

Soon they were running directly below Mick, with no idea what to do.

Sometimes things take care of themselves. Mick flew into a large oak tree where a sharp limb punctured one of the balloons. The remaining balloon, caught by a wind current, reversed its course, and drifted away from the tree. The single balloon was not enough to support him and he began to fall.

Bobby and Billy now realized they were holding a mattress cover with nothing inside to cushion the landing. Dropping the empty cover, and with Bee Bee helping, they absorbed Mick’s hard landing with their bodies.

The Bunch, as they had come to be known around town, had escaped from one more disaster.

Mrs. Cox, a nearby neighbor, was on the news that night telling about the strange-looking UFO she saw while hanging out her wash. Questioned by reporters, she had a difficult time describing it.

“It resembled a human with a head like a pair of tennis shoes with huge red ears, probably its radar system,” she ventured. “It left a trail of white on the ground as it sped by.”

A call was in to Washington.